In honour of World Breastfeeding Week, here are my experiences of breastfeeding a baby with food allergies including CMPA.  I wanted to share my story so that other mums know that it is perfectly possible to breastfeed a baby even if they have cow's milk protein allergy or other allergies.  In my next post I'll have some tips and advice for those who are going through it right now.

I had breastfed my first baby for 23 months, albeit not exclusively as I had hoped.  We had some real struggles in the first couple of months (including 100% tongue tie and a breast abscess - but that's another story!).  Despite this, I really enjoyed breastfeeding and wanted to do the same with my second baby.

When she was born it took her a while to latch on as she was exhausted from the birth.  She had 'got stuck' and while we were waiting to go into theatre for ventouse, there were another two emergencies that went in front of us and we ended up waiting for several hours.  Once she did latch on I noticed that she was really sick afterwards. Not just a little bit of spit up which you might expect, but it seemed like she was bringing back up the entire feed.  We only stayed in hospital for a few hours after she was born but I had to send my husband out to buy more baby clothes for her as she had been sick over all the spare outfits I had packed in my hospital bag. 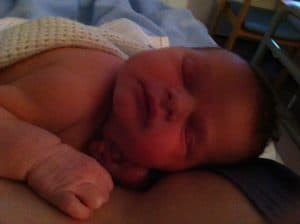 Skin to skin cuddles in hospital

When we got home, she carried on being sick after every feed and cried a lot.  My first baby had been quite colicky and was a real crier, but baby number 2 cried even more.  She would draw up her knees in pain and struggle to pass wind or poo.  We became experts at the 'Tiger in the Tree' baby hold, which seemed to help.  A friend of mine who was a breastfeeding peer supporter mentioned a study she had seen showing that breastfed babies with colic had fewer symptoms when the mum cut dairy out of her diet, so I decided to give it a go for a couple of weeks.  I know it's a cliche but suddenly she was a different baby!  After the two weeks were up I reintroduced the dairy, just to make sure that was really the cause.  The colic, crying and tummy aches came back along with a delightful rash of eczema all across her face, confirming CMPA. 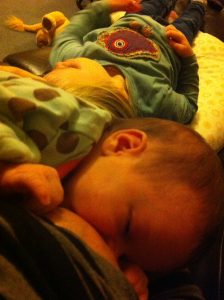 Breastfeeding a baby whilst looking after a 3 year old!

Of course I immediately cut the dairy straight back out again.  I didn't find it easy because I really love cheese, and breastfeeding is the perfect time to eat chocolate cake without any guilt, but I decided it was worth it!  Naturally, I started consuming a lot of soya products and I noticed she was getting more colicky symptoms again. I stopped drinking soya milk and she seemed to get better.  I wasn't strict about checking food labels for soya though.

Suddenly, around 3 months old she started doing green poos up to 14 times a day!  This went on for about 4 weeks.  I went to the doctor several times and was even referred to a paediatrician but no one picked up that it could be allergies.  I was told it was a stomach bug and not to worry.  In utter frustration, I then decided to take matters into my own hands and strictly avoid soya, including soya lecithin.  Again I was back at the beginning of a steep learning curve and reading food labels constantly.  But the green poos stopped and her tummy seemed to go back to normal.  Problem solved...? 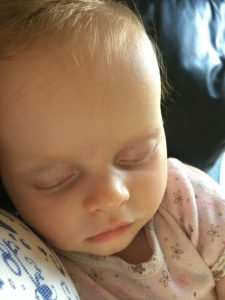 Asleep on me after a feed

At 6 months we started introducing solid foods.  I hadn't picked up on the advice to introduce one new food every three days for babies at high risk of food allergies, so we just went for it and included her in family meals.

After a couple of months I realised that something wasn't right - her sleep had just got worse and worse and she was regularly crying for 2-3 hours continuously in the middle of the night, despite the fact that we were cosleeping so she could have as many cuddles as she wanted.   During the day she was just miserable all the time and wanted to be held constantly.  She would only nap upright, in her sling.  If I put her in her baby car seat, she would scream non-stop, to the point where I stopped driving anywhere.  She had started to develop a few small patches of eczema as well.

At the time I really questioned myself.  Was I going mad to think there was something wrong with my baby?  Was it some sort of developmental phase or sleep regression? Would it get better if I just waited? Was my parenting wrong?  Should I just leave her to cry? Due to the lack of support I'd had from the GP before I really couldn't be bothered to go back there again.  So, once again, I decided to take matters in my own hands and started to keep a food and symptoms diary.  I started to notice we had a bad night's sleep if we had eaten oats, eggs, wheat, peas, beans or pulses.  In desperation, I cut those foods out of my own diet and hers. 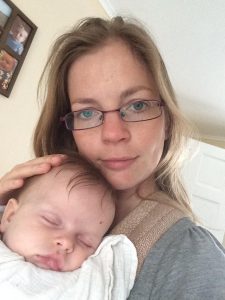 Asleep in the sling, with muslin for dribble!

Sleep! Blessed, lovely, wonderful, amazing sleep!  Don't get me wrong, she would still wake up for a feed in the night, but then she would just...go back to sleep!  And so did I!  It was really hard to cut all of those foods out but it was so worth it to have a baby that slept!  She was happier during the day (still loved a cuddle but was happier to be put down for a while).  She even started napping in her bed! So, now that I had some evidence, I went back to the doctor and he finally acknowledged that she had multiple allergies and referred us to a paediatrician.

We had to wait a few weeks to see the paediatrician. He said that I had done absolutely the right thing - in fact he said "I don't know why you are here, because you've already done all the hard work!" We discussed all her symptoms and what I had done with the food diary and exclusion diet.  He confirmed all her allergies and told me to continue avoiding those foods.  He encouraged me to continue breastfeeding up to at least 2 years if I wanted to.  I saw a dietitian as well who advised me on nutrition, diet and supplements while breastfeeding with allergies.

Learning How to Live with Food Allergies

It was a challenging time in terms of food.  Our diet was basically restricted to meat, fish, fruit, vegetables, nuts, seeds, rice and corn.  It was ok at home but going out was a nightmare.  There were very few restaurants that could cater for us, and those that could just offered plain chicken and chips, or occasionally gluten-free spaghetti bolognese.  There was no chance of a slice of cake or a sandwich in a cafe.  Social gatherings with friends and family were difficult too, as there's always food involved.  I lost a lot of weight and was constantly hungry.  In short, it was hard work.  But I was happy to do it and looking back, wouldn't do anything differently.

I finally decided to stop breastfeeding at 23 months.  This was nothing to do with the allergies, but purely my personal choice.  It was increasingly becoming a battle and I wasn't enjoying it any more.  Funnily enough it was the same age I had stopped breastfeeding my older daughter as well!

Looking Back on Our Breastfeeding Journey

With hindsight I am still really glad I chose to breastfeed my baby with food allergies.  Breastfeeding is so beneficial for the immune system.  I can't be sure, but I'd like to think it's part of the reason why she has now (at 4 years old) grown out of most of her allergies.  It was nice that I was able to breastfeed both of my babies for the same length of time - not on purpose but that was just what felt right to me.  From the CMPA support group on Facebook I saw a lot of posts from mums who were struggling to get prescription formula, so I was glad not to have that battle.  It's also given me much greater empathy and understanding of what it is like to live with food allergies - hence why I started this blog!

Did you, or are you still, breastfeeding your baby with food allergies?  What have your experiences been?  Leave a comment below, I'd love to hear from you!