If you're breastfeeding a baby with food allergies, you may have been told that it takes 2 weeks for food proteins to get out of your breast milk.  But is this really true?  In today's guest post, Dr Trill, a Molecular Biologist who has breastfed two babies with severe food allergies, tell us what the science really says about how long allergens stay in your breast milk:

Few things are as terrifying as an infant allergic reaction.  It can come in the form of a rash, chronic diarrhea (possibly with blood), anaphylaxis, and more.  Food sensitivities can appear as early as the first few weeks of life.  Such a young age, combined with these severe symptoms, can leave parents desperate for answers.  I was in this situation three years ago, bawling in the hospital stairwell after doctors told me that my daughter was in so much pain because of my breast milk.

We discovered that my 3-week-old had severe food sensitivities.  Since traditional allergy testing is ineffective for children that young, we were informed that it was best to eliminate all allergens from her diet.  We were strongly encouraged to end our breastfeeding journey and replace it with an amino acid formula that smelled like sweaty gym socks and cost $50 a CAN.

I wanted so badly to continue breastfeeding my daughter.  The doctors stated that I could do so but would have to remove all allergens from my diet for at least two weeks before I could feed her.  According to them, that was the amount of time it would take for the food proteins to leave my breast milk.  During those two weeks, we fed her the formula while I pumped around the clock.  Finally, two weeks passed, and we were incredibly lucky that the transition back to breastfeeding was smooth (probably because it was an improvement from sweaty gym socks). 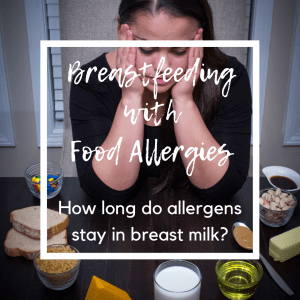 While I was grateful to be breastfeeding again, I lived every day in fear.  Fear that I would read a label wrong.  Fear that I would run out of my packed meals and need to grab something on the go.  Fear that my husband would forget and accidentally add the wrong ingredient to my food.  Debilitating fear.  Every time there was a fussy night or a tiny bump on her body I would die on the inside, thinking: I did that.  She’s having a reaction and it is all my fault.

How Long do Allergens Stay in Breast Milk?

Since then, I graduated with my Ph.D. in Cellular and Molecular Biology.  So, when my second daughter was born with the same issues, I decided to dig into the research.  What I found was SHOCKING.

Mind.  Blown.  Scientists have conducted several studies of breast milk at different time intervals after ingestion by the mother.  For instance, one lab gave 23 women a serving of peanuts.  Only half of them ended up with detectable levels of peanut protein in their milk.  The milk that did contain the allergen peaked in concentration between 1-2 hours and steadily decreased from there [1].

So why didn't my doctor tell me this?

The question emerges: WHY would doctors say it takes 2 weeks?  WHY would online articles spread this lie?

I believe the answer is two-fold.  First, scientific research explains that it may take up to 2 weeks for the infant to be clear of symptoms.  This is the case whether the child is placed on hypoallergenic formula OR breastmilk in conjunction with an elimination diet (let’s call this hypoallergenic breast milk).  So, while mothers may be clear of allergens, their infant will likely continue to show symptoms for a few more weeks.

After speaking to a few MDs about this, they all made the same basic statement:  they are taught to say that allergens exist in milk for up to two weeks as a precaution and to explain why the child is still suffering from symptoms.  The extra precaution is the second element.  Every person’s metabolism is different so the exact amount of time that it will take any given allergen to clear from milk will vary.  However, the research undoubtedly shows it is nowhere near two weeks.

How about online articles?

Even Kellymom.com makes this statement:

If you think your baby is reacting to a particular food, then eliminate that food from your diet for 2-3 weeks to see if baby’s symptoms improve. If baby’s symptoms do improve, then this food may be a problem for your baby. Eliminating a food for less than 2-3 weeks may not be effective—cow’s milk protein, for example, can persist in mom’s body for 1½ – 2 weeks, and it may be another 1½ – 2 weeks before the protein is out of baby’s system.

However, if you dig into their cited research you will find a review which references a study conducted by Dr. Nowak [2] which makes the following statements:

“In the majority of infants with [cow's milk] and/or soy FPIES, symptoms resolve within 3–10 days of starting extensively hydrolyzed casein formula.”

“Symptomatic infants with chronic FPIES improve within 3–10 days with i.v. fluids or with hypoallergenic formula.”

Nowhere in this cited journal does it say anything about causing a continuation of symptoms through contaminated breast milk that lasts for 2 weeks.

It’s important to note that I’m not talking about “pumping and dumping”.  You will naturally send the protein through your body, to potentially include your milk, and then your cellular metabolism will use it up [3].  Your milk is not a holding place where things can enter from the body and only exit through your nipples.  Breast milk is constantly changing, no dumping required.

What does this mean?

It means you can finally breathe.  If you are just starting your elimination diet for your food sensitive infant, it will take less than a day to produce hypoallergenic breastmilk.  If you accidentally eat an allergen, you could wait to continue breastfeeding for up to 8 hours and then confidently power on.  It would be wise to have at least 24 hours’ worth of saved breastmilk or formula available in case this occurs.  Depending on how much of the allergen you ate and how severe the symptoms, you can decide when you feel comfortable nursing again.  During that time, you can pump and donate the “allergen-contaminated” milk to a baby without allergies.  No one is perfect, and the fact that you do not have to be, should be more widespread in the breastfeeding, allergen, and medical worlds. 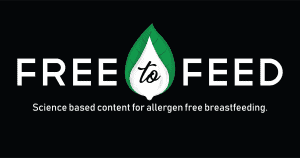 Update 11th May 2020:  There is a further study, which shows that cow's milk protein can be detected in breast milk 7 days after eating a single serving of cow's milk.  However, the *highest* concentration of cow's milk protein detected in this study was 200 times lower than the amount needed to cause a reaction.  So there is no need for breastfeeding mums to worry.  Read Dr Trill's comments on this in her blog post, and read the original study here: https://www.ncbi.nlm.nih.gov/pubmed/28222656 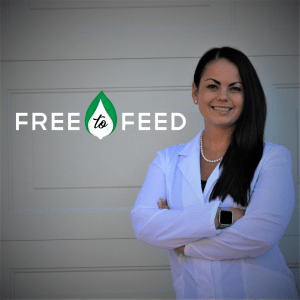 Trill’s passion as a Molecular Biologist and mother of two led to her founding Free to Feed, LLC.  F2F creates science-based content for allergen-free breastfeeding and is developing products to empower breastfeeding parents.  Her current position, overseeing a dairy processing laboratory, has allowed her to translate knowledge in the dairy industry to the benefit of parents with food-sensitive infants.  In addition to her professional civilian career, Trill is an OIF Veteran and is presently serving her 13th year in the Army National Guard.